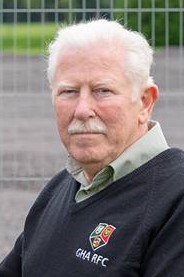 It is with great sadness that GHA report the passing of Ken McKinlay on Sunday after a long and hard-fought illness.
Ken was a member of founder club Clarkston RFC and enjoyed a long playing career that included a comeback for the GHA Gazelles in later years.

More recently, Ken volunteered his time assisting with administrative duties at the club and was a regular, friendly face around the clubhouse. He remained positive and showed a great deal of strength throughout his treatment, continuing to give the club his time as often as he could.

Ken was a true club man who will be missed by his friends, club members and the staff at GHA. Our thoughts go out to his wife, children and grandchildren.

Funeral arrangements have been made and will take place at 10am on Monday 4th November at St Gabriel’s in Newlands, followed by the Linn Crematorium at 12pm and then back to GHA Rugby Club.

Evelyn McMurtrieGHA CRASH OUT OF CUP WITH DISMAL FIRST HALF DEFENCE

20 hours ago 📸A few snaps from our 1XV hone game against @EdinburghAccies thanks to Joyce & Colin, @RobinsonImaging ! Check out… https://t.co/tclwj6e6BE
3 days ago Thank you to everyone who came Braidholm today and travelled to support the teams. Your 1XV Man of The Match is Wa… https://t.co/A81yYQelgI
3 days ago Incoming full time scores: GHA 1XV 20 - @EdinburghAccies 28 GHA 2XV 52 - @GlasgowAccies 13 GHA Lions 52 - @GWRFC 7… https://t.co/ILTHa3Y5Ou

Full album now available via the link in our bio!

📸 A few from Saturday’s Tennent’s Premiership home game against @currie_chieftains, courtesy of Joyce & Colin from @colinrobinsonphotography !

Thanks to everyone who joined us for our final senior home games of 2021.
Next up: A double header for our 1XV & 2XV away to Marr, Saturday 11th December!💪🏼

What it means to get the win💪🏼🏉
.
📸A few from Saturday’s game against Musselburgh RFC in the Tennent’s Premiership, thanks to Colin & Joyce from @colinrobinsonphotography. An extra special home game at Braidholm after 2 weeks off for the 1XV.
.
Featuring our new @kitvendr 1XV kit from sponsors @themalcolmgroup , JWF, RBR Supplies & Eastwood Electrical.